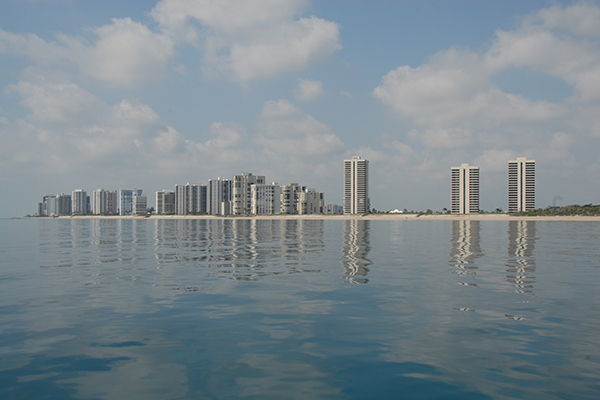 Nearly 60% of the world’s population lives and works within 100 km of the coast, and a majority of metropolises with a population of more than 2.5 million, are situated at the edge of the sea. People chose to live near the water for various reasons: a fairly moderate climate influenced by coastal winds, and year-round access to leisure, fishing, and ports for navigation and transportation of goods. For many, the deciding factor evolves around the lifestyle coastal environments provide. In recent decades, affluent urbanites and retirees have begun to move to small existing coastal towns or newly created communities in their search for beautiful, natural surroundings. Recent research, suggesting that people who live closer to the coast are in better health, has only strengthened its appeal.

Undoubtedly, the largest influence on coastal development can be traced back to tourism, which represents the world’s largest service industry, supporting 1 in 12 jobs globally and generating $6.5 trillion every year. International travel has increased 40-fold since 1960 and surpassed 1 billion travelers in 2012, with many tourists spending time on the beach, or on the water. In fact, 12 of the 15 top international destinations are countries with coastlines. Sand, sun and sea tourism makes for the largest and most lucrative sector of the tourism industry.

In response to the increasing demand, coastal areas across the globe have seen a great deal of urban and resort development, including large, all-inclusive resorts, small upscale boutique hotels, eco-lodges, marinas, residential (second) homes, and commercial areas. Naturally, these developments often raise environmental and socio-cultural issues, including the modification of the natural landscape, competition for scarce resources, rising real estate prices, potential loss of distinctive character, the displacement of local fishing and farming communities, and the outright destruction of natural jewels, such as mangroves and coral reefs. The promise to create sustainable and resilient developments too often remains unfulfilled, quickly leading to increasing resistance from coastal communities and other stakeholders. Given the diverse ecosystem services coastal systems provide, these conflicts between utilization versus protection are bound to arise, and add to the already existing challenges, from water scarcity, resource shortages and climate change, to social inequities that threaten to destroy the social fabric of many of our communities.

Change is evitable, negative outcomes aren’t. In the past, little if any consideration was given to the importance of the natural and socio-cultural systems in coastal areas that already existed in areas under consideration for new real estate and tourism development projects.

It is encouraging that one of the world’s leading planning and design firms, EDSA in Fort Lauderdale, has begun to develop and employ a more research-based and performance orientated approach that emphasizes sustainability and resiliency when shaping the future of our coastlines.

Your ticket for the: Coastal Development