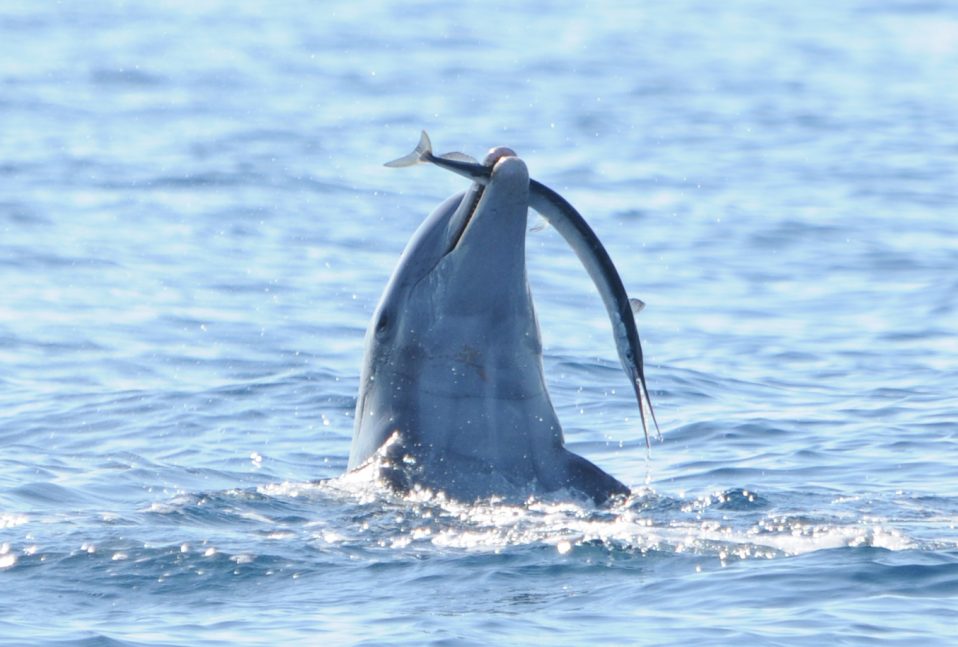 For the last decade, the Taras Oceanographic Foundation, under a general authority of the National Marine Fisheries Service, has been conducting dolphin surveys in Palm Beach County. We position or boat within three miles from shore, and travel at slow speed, until we see dolphins. We will then follow the dolphins long enough to photograph each dolphin and document their behavior. And although we have studied wild dolphins for decades, we still find new and different behaviors that are remarkable.

There are days when bait fish seem to fall fro m the sky. On those special days, when the seas are flat, we watch all kin ds of fish jumping out of the water; some high in the air in a single arc, others low and repeatedly as they travel some distance. Flying fish routinely glide, with ease, for several meters. Ballyhoo and Bonita will jump to avoid being eaten. Every once in a while, a clever dolphin will take advantage of these jumping fish; a clever dolphin like Odyssey, and her offspring.
Odyssey was conducting a master class in the art of catching fish. And when I say ‘catching fish’ I mean CATCHING fish. She was throwing a fish into the air, and artfully catching with in her mouth. She demonstrated the process a few times for her calf, and then did something remarkable.

She bit off the head of the fish, before throwing the body in the air, for her calf to catch. We could not help but make the comparison of a mother cutting the crust off a sandwich, before serving it to her child. But it is more than that; she was keeping her calf safe.
For the significance of this simple act, we need to first ex­ amine the basic anatomy of a fish. Fish use gills to acquire oxygen from the water. These gills are located just at the base of the head. When a fish breathes, it draws in a mouthful of water and pulls the sides of its throat together, forcing the water through the gill openings, which expand away from the body.

Dolphins do not chew their food. It is imperative, therefore, for a dolphin to swallow their prey, head first. If a fish were eaten tail first, it might expand its gills while passing through the throat of the dolphin and become wedged. In all the necropsies I performed, I once found one dolphin with a fish caught in its throat. The fish was swallow ed tail first, and the res ult was deadly. Back to Odyssey and her calf.
She was biting the heads off the fish, so her calf would not catch the fish backwards and choke to death. She threw the fish body high in the air, and her calf made repeated attempts to make the catch. More likely motivated by the game than the food, the small dolphin was still nursing and probably not too hungry. Over the next few months, as this calf grows, Odyssey will insist it hunt down its own food. The catching strategies learned now, will be all the more important in the future.

But even the best strategies and the most prepared youngster will not grow to be an adult unless there continues to be the abundance and variety of fish to eat. We are currently living through the sixth mass extinction event this planet has experienced. ln the past, these epic occurrences were the result of volcanic eruptions or asteroids striking the earth, but this time they are our own doing.

Why is it important to study dolphins? Sure they are cute and all, but why should anyone support such endeavors? Because in many ways, we are alike. Dolphins eat the fish we eat. They raise their kids to be better citizens and work every day to make a living and support their families. They are the masters of the ocean environment; a subject about which we are remarkably naive. And the ocean is vital to the survival of us both.

Although we continue to harvest the resources the oceans provide, at unsustainable rates, we could learn from the marine mammals how to find areas of highest productivity and hunt selectively. As we increase the noise in the ocean with our recreational watercraft, commercial ships and military exercises, we learn from the dolphins that in the deep ocean, it is by listening and hearing we can have the best vision. Marine mammals are the ocean canaries, warning us about the disastrous effects of pollution and habitat destruction, and they can be our guides to find answers, to questions we have not yet thought to ask about the ocean realm.

It is through the long- term studies like the one we have been carrying out in Palm Beach waters, that dolphins teach us about the ocean, the world and ourselves. We just have to keep going to school.

***
We all depend on a healthy ocean; a healthy ocean depends on us. Let us be the change we would like to see in the world. Our new Ocean Sentinels Club is proof that conservation can be fun, rewarding and effective. The Club unites and empowers citizens to advocate for the conservation of dolphins and the marine environment across Palm Beach County, and beyond. Join us. The time is now. It begins with you.