In the Eyes of the Dolphin 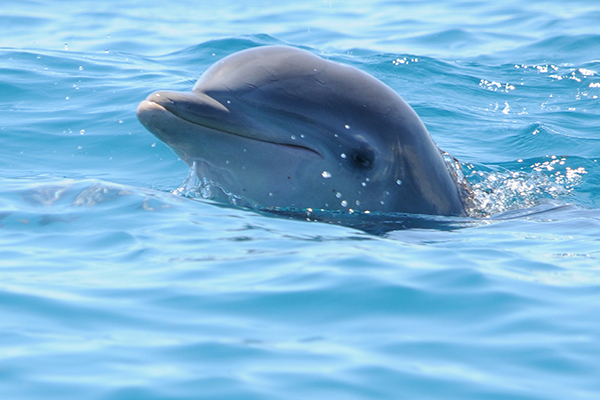 Dolphins can use their sonar to detect complex shapes and identify them visually. Captive animals have been known to throw frisbees and catch fish without using their sonar. And at any oceanarium it is common to witness dolphins demonstrating their amazing ability to leap out of the water and touch a small target many feet above the surface. These same dolphins repeatedly sail over tightropes and through hoops without touching them, often times in unison. All demonstrating that cetaceans are capable of seeing, not only underwater, but also in air and from water to air. The combination of their visual acuity and sonar abilities makes dolphins well equipped to evaluate any and all objects in their environment.

When the ancestors of the modern dolphin re-entered the water, so many eons ago, their eyes and eyesight went through some major transformations.

On land, eyesight is primarily challenged by dust and the threat of physical harm. These problems are counteracted by hairy eyebrows and lashes and eyeballs that are located in deep sockets of the skull for protection. Tears help wash away dust and clean the eyes. In the sea, the challenges to the eye are more associated with salt and particles in the water, as well as the massive pressure associated with deep dives. Cetacean eyes are encapsulated to protect the shape and integrity of the orb from pressure during dives. There are no dolphin tears, instead special glands secrete oil that continuously wash the surface of the eye to prevent irritation from salinity.

Land animals depend on detection of movement, position, color, detail and sharpness as visual cues. Dolphin vision is more dependent on brightness. The cetacean eye is adapted to perform at depths where light is minimal. At thirty feet, as much as 90% of sunlight is lost and color disappears. The dolphin pupil is capable of opening enormously wide to enhance brightness. The eyes are also lined with a highly reflective substance that concentrates light, similar to the silver of an old traditional headlight. The eyeball has an oval shape, and the lens is positioned to prevent even the weakest ray of light from escaping the retina.

On the other hand, dolphins must see not only at lightless depths, but also at or just below the surface, where it is the brightest. Due to water movement and its effect on sunlight, it can be more than seven times brighter just below the surface than it is above the water. The eye is equipped with a flap like structure that closes over the restricted pupil. It can look as if the dolphin has two tiny pupils at times. Even so, the ability of the dolphin to go from near complete darkness to extreme brightness is one of the miracles of the dolphin eye.

The position of the dolphin eye on each side of the head not only provides additional protection from the onslaught of ocean particles as the dolphin swims forward through the water, but also allows for a nearly complete field of vision. This position of the eye provides some stereo vision directly below them, but also creates a blind spot directly in front of the dolphin. This is one of the places where the sonar comes in handy as they can virtually “see” anything in this blind spot… with sound.

Dolphins don’t just use their eyesight to locate food. The structure of dolphin societies suggests a strong use of visual cues in communication. It makes perfect sense that in an environment where danger can come from any and all directions, silent communication is important. Body posture and subtle swimming techniques can effectively give the others a warning. They can also express irritation, initiate romance and/or provide comfort. An S-shaped body posture by an individual is thought to represent some degree of annoyance, an inverted swim under a female by a male suggests courtship, and companions often swim side by side, eye to eye and rub pectoral fins, possibly during new or unique situations.

Since the dolphin body has adapted to be optimum in the aquatic world, they have lost the ability for facial expression common in terrestrial mammals. They cannot smile with satisfaction, nor grimace in pain. Therefore there must be a lot to be seen in the eye of the dolphin. As many of us here at the Palm Beach Dolphin Project can attest, dolphins are not only capable but sometimes insistent on making eye contact. Not only with each other but with us as well. Here’s looking at you kid!

Your ticket for the: In the Eyes of the Dolphin

In the Eyes of the Dolphin