The Face is Familiar, but … 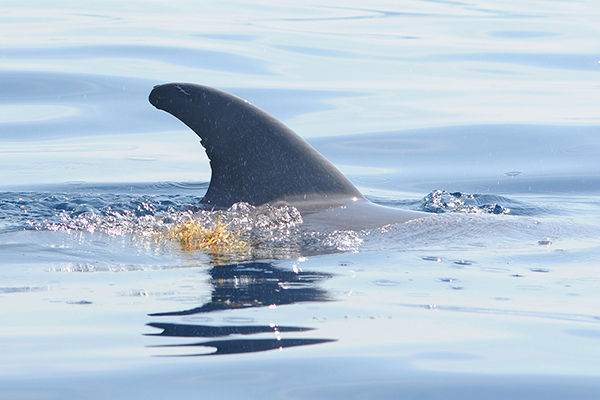 The casual identification of individual cetaceans probably started when humans began interacting with coastal species over a century ago, when whalers and fishermen could identify a few individual killer whales by the shape and coloration of the dorsal fin. This technique, much refined, is still used today.

Scientists, studying cetaceans have long understood and appreciated the need to track individual whales or dolphins. Identifying individuals can help in the collection of information on group composition, site fidelity, movement patterns, population size, as well social structure. Given that dolphins and whales are extremely social animals, understanding the social structure of the population is vital to understanding cetaceans.

Most cetacean studies are conducted from the surface, where the dorsal fin is often the only visible part of the dolphin and therefore the only part usable as an identifier. Luckily, the trailing edge of the dorsal fin, which consists of a thin sheet of flesh and connective tissue, is the most identifying feature of most dolphins and porpoises. Small nicks or larger notches in this area of the dorsal fin are consistent markings that can be used to track individuals over time. However the shading, coloration and overall shape of the dorsal fin can also be helpful.

Some cetaceans have other areas that are more useful as identifiers. The humpback whale has unique markings on the bottom of its flukes, the right whale has large crusty growths on its upper lip that grow in unique patterns and are used to identify individuals and the spotted dolphins have spots; clusters and constellations of spots which are great individual markings and very helpful in the identification process. These dolphins, however, get more and more spots as they develop from infants to adults, identifying spot clusters get covered by new spots, and so it is important to continuously track them over time. All of these identifiers are, in most cases, very subtle, and hard to track in the field. This is where capturing images with photo or video cameras becomes important.

In nearly all studies of cetaceans that track individuals, photo-identification techniques are used to some degree. Most researchers depend on their cameras and photo files a great deal. To get a usable id photo from the surface, it is important to get the dorsal fin on film from a 90-degree angle. This eliminates distortion from angle and helps prevent misidentifications. Any time, we can observe dolphins from underwater, we can use the entire body of the dolphin for identification purposes, which can be very useful, especially in the case of spotted dolphins where we use the spotting pattern across the entire body to identify individual dolphins.

As any field researcher will tell you, it takes a great number of photos to get usable shots. But then, experience does matter and now that we use digital photography, having to throw away bad shots does not hurt as much as it did when we used film.

Your ticket for the: The Face is Familiar, but …

The Face is Familiar, but …