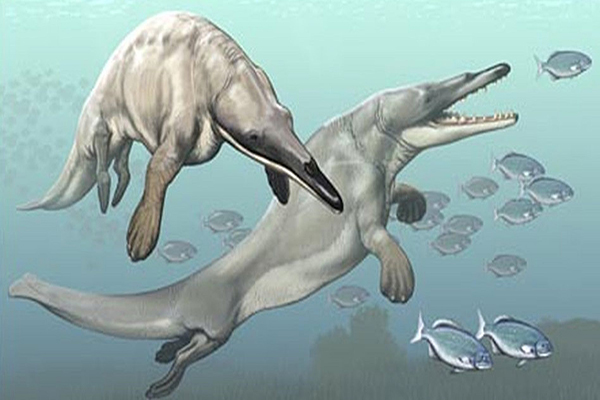 Well, we can’t exactly tell you what archaeocetes were, but we can tell you what they were not. They were not filter-feeders like the baleen whales (mysticetes), and they had no form of echolocation, as the toothed whales (odontocetes) do. There are very few clues, but we believe they are not categorized by any unique characteristic.

We know they lived from 50 to 35 million years ago (the eocene period) after which they somewhat abruptly disappeared (geologically speaking, that is). Evidence of their existence has been found in all parts of the world. Archaeocetes probably spent some time on land, and some time in shallow coastal waters, feeding in the tidal zone. There is some debate about whether or not the archaeocetes were the evolutionary predecessor to the odontocetes and mysticetes, but either way there is no doubt that the odontocetes and the mysticetes flourished once the archaeocetes disappeared.

Research has shown that two separate families of cetaceans existed then: the Protocetidae were small-bodied animals, less than 3meters long (9 feet), with their nostrils just behind the tip of their long, slender snout and their teeth not unlike those of a wolf. The Basilosauridae was a medium-sized cetacean, ranging in length from 15-20 meters (45 to 60 feet) in length. This was a rather serpentine animal with un-fused vertebrae, allowing for great mobility in all directions. They had a defined rostrum, but no melon (bulge on the front of their head), and small hind, somewhat useless, legs. They were foragers and lived of fish. It is believed that they hauled themselves out of the water onto beaches to breed, in a way similar to that of seals. The first of these two families disappeared nearly 50 million years ago, and the second family disappeared about 40 million years ago.

Among the archaeocetes were also distinct types of dolphins. Although they were very easily recognized as dolphin in appearance and lifestyle, we would say they both had a very primitive air about them. Both animals were about average in size and used a limited form of echolocation. The Kentriodontids were foragers, similar to the modern-day bottlenose dolphins. The Squalidontids had very long rostrums (beaks) and triangular, serrated teeth (similar to shark teeth). It is believed that they had a very active carnivorous lifestyle, not unlike that of the killer whale. What an interesting appearance they must have had, with their blowhole situated at an odd, forward angle, atop but near the front of their heads. Five or six million years ago both these families disappeared, after sharing the planet for about 25 million years. The reason for their disappearance remains a mystery.

Today, we recognize 14 species of baleen whale including the blue, bowhead, right, humpback, minke and grey whale. Baleen whales are generally larger than toothed whales except for the sperm whale which is very big and has teeth. Depending on the source, tooth whales comprise 69 – 76 species and 6 – 10 families.

The two dolphins most frequently encountered in our study area (off Palm Beach County) are the bottlenose dolphin. And the Atlantic spotted dolphin, both members of the family Delphinidae.

Your ticket for the: Archaeocetes