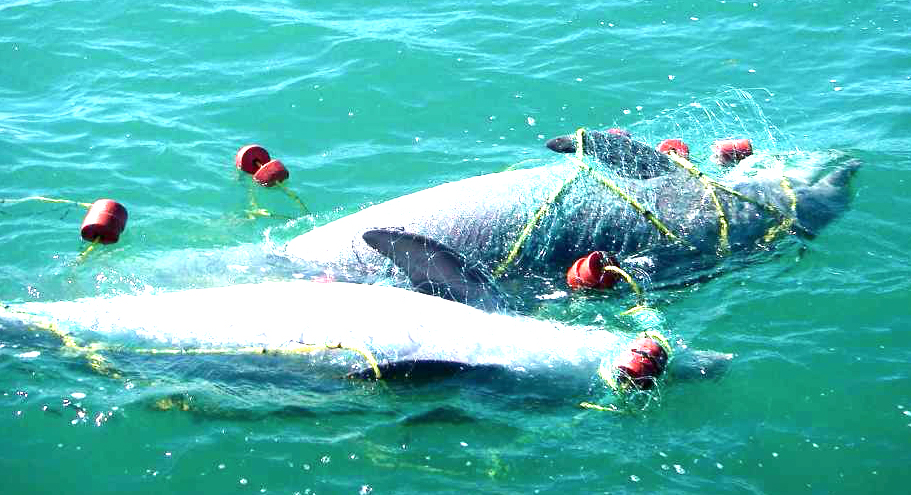 Threats to Whales and Dolphins

Whales and dolphins are a vibrant part of the global ecosystem and their populations have been severely affected in various ways.

Many species have been over-hunted in the past, and several populations are reduced to a small fraction of their original levels. They are vulnerable to entanglement in fishing gear and incidental catch in gillnets is one of the most serious threats to marine mammals.  These fishery operations may well cause the extinction of several small cetacean populations within the next few decades, including the Vaquita and Chilean dolphins. Collisions between larger whales and ships (ship strikes) occur with regular frequency and represent a significant cause of death and traumatic injury.  Because toothed whales and dolphins are top predators and thus at a higher tropic level in the food chain, they are especially prone to bio-accumulating toxins, such as heavy metals, persistent organic pollutants (POPs) and endocrine disrupting chemicals (EDCs). However, as recent research has demonstrated, such toxins and pollutants also negatively impact baleen whales.

Another threat to the health of whales and dolphins comes from the petroleum industry. Seismic surveys, which are used to discover oil and gas field situated below the seabed are, at a minimum, suspected to damage the complex hearing system of these marine mammals. Once the oil extraction processes is under way, the negative impacts shift habitat loss and exposure to hydrocarbons, lubricants and outright pollutants and toxins used in the process.

Loss of whale and dolphin habitat is directly linked to increasing human activity in and along marine environments. The aggregation of wastes we allow to flow into our streams and estuaries, and ultimately into the oceans, is a biochemical soup carrying thousands of different chemicals. Rainwater and snow melt, that run off from congested urban areas, collect street oil and chemicals as well as many metals. Runoff into streams and rivers adjacent to farmlands carry tons of suspended particles of soil. This is not only damaging to fish but can also choke-out submerged oxygen-giving grasses in coastal woodlands, bays or estuaries. Runoff from timber harvesting activities, especially clear cutting, deprives the exposed land of thousands of tons of soil and has caused the pollution of some of the most valuable spawning grounds for trout and salmon in the Pacific Northwest. Runoff of the nitrogen and phosphorus components of fertilizers leads to an oxygen depletion in the water. This depletion has caused massive fish die-offs and can wipe out whole areas of marine habitat necessary to maintain the life cycles of myriads of species of aquatic life.

Marine debris is a visible expression of human impact on the marine environment. Debris is more than an aesthetic problem, it poses a real danger. Ocean currents carry milk cartons, toothbrushes, cigarette lighters, and other familiar plastic items around the world. In some areas, such as the Central Pacific Gyre, plastics outnumber plankton seven to one.

The number of marine mammals that die each year due to ingestion and entanglement of debris approaches 100,000 in the North Pacific Ocean alone. Worldwide, 82 of 144 bird species examined contained small debris in their stomachs. Plastic is the most far-reaching man-made threat facing many marine species. Over time, it reacts with sunlight and turns into small plastic polymer molecules. It turns out that these plastic polymers are sponges for DDT, PCBs and other toxins that don’t dissolve in seawater. Plastic pellets have been found to accumulate up to one million times the level of these poisons that are floating in the water itself. These pellets are consumed by baitfish, which in turn are consumed by larger fish, eventually finding their way into the stomachs of large predators, such as dolphins and toothed whales, and our own.

Other human activities, such as the construction of shipping channels and marinas, and the recreational use of coastal areas, including resort development, are likely to have a negative impact on the lives of whales and dolphins using the same areas.

Last but not least, climate change, with its changes of sea temperature, sea level rise, changes in salinity, just to name a few, will undoubtedly change the socio-ecology of whales and dolphins. Species inhabiting the high latitudes, such as bowhead, narwhal, beluga may be the first to feel the impact due to diminishing food resources, such as krill. But other species, such as humpback whales and killer whales will likely experience significant changes in their food supply, resulting in changes of existing migration patterns and a shift of home ranges.

Whales and dolphins are facing enormous challenges and threats. They are the ocean canaries, warning us about the disastrous effects of pollution and habitat destruction, and they can be our guides to where to look for answers about how our oceans work. If we have any philosophical leanings towards preserving these wonderful creatures and the oceans, either for future generations or for its own value, than learning enough to prevent any further damage is crucial.

Your ticket for the: Threats to Whales and Dolphins

Threats to Whales and Dolphins