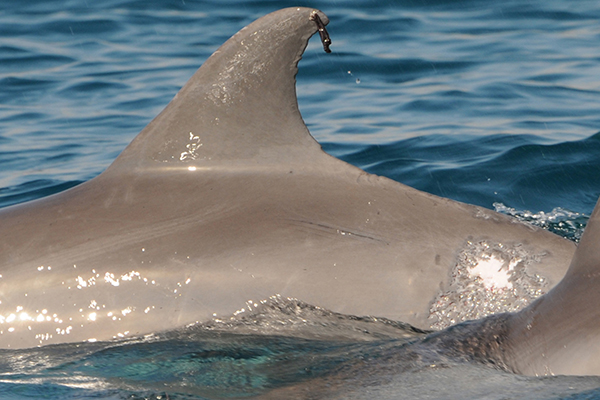 Over the past 50 years, a great number of previously un-known human diseases emerged, while other well-known maladies, including cholera and tuberculosis, have seen a significant resurgence. Not surprisingly, dolphins and other marine mammals experience a similar trend, with various papillomaviruses, dolphin poxvirus, lobomycosis, various neoplastic diseases, and algal bloom bio-intoxication being among the better-understood disease agents or diseases. Our experience in human medicine should cause all of us to be concerned about the deterioration of aquatic eco-systems, coastal freshwater or marine, especially since they support more than half of the population in the U.S. alone.

Monitoring the overall health status of dolphins provides an excellent avenue to evaluate the wellbeing of entire aquatic systems, and identify possible environmental trends. Dolphins are the ocean canaries, warning us about existing and emerging threats not only to the aquatic eco-systems, but also to human health. No doubt, it is in our own best interest to closely observe any patterns affecting their behavior or health as it could affect humans in the long run.

Let’s focus on the recent water-related issue in south Florida: the catastrophic, harmful algae bloom that descended onto the Port St. Lucie River lagoon and associated waterways and tributaries to both the east and west coastlines of Florida. Algae blooms have become a regular occurrence in this area for years, but this year’s outbreak was larger by order of several magnitudes.

While some people may think that such algae blooms represent little, if any dangers, it is well established that such blooms produce neurotoxins that can kill dolphins and other marine life, as well as biotoxins that affect human health. Among those threats to our own wellbeing are brevetoxins and saxitoxins that cause poisoning, and okadaic acid, which causes diarrhea.

Some recent disease outbreaks (epizootics) among bottlenose dolphin populations in southeast Florida serve as prime examples of how studying dolphins can help us manage health risks. Several of these outbreaks were associated with brevetoxins, produced by a dinoflagellate called Karenia brevis. That is the same species causing the so-called red tides. Brevetoxins are known to kill and/or contaminate fish and shellfish. Once we consume those, or simply inhale toxic aerosols, we will fall ill. It is noteworthy to emphasize that the actual exposure may be delayed, meaning that the risk to human health continues long after, or far away, from the original dinoflagellate bloom.

Some of the visible impact of exp 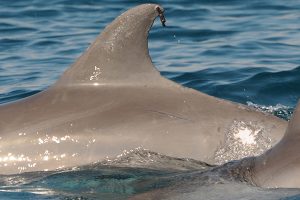 osure to toxins and viruses manifests itself in form of changes on the dolphin’s skin (see image), just as sun- chemical burns damage our skin. Some of these damages may be short-term, changing the color of the skin, or leading to the shedding of dead skin (common results of sunburns in humans), but long-term impacts, including skin cancer are well documented. In summary, any increase in toxins, whether due to natural or anthropogenic cause, in our coastal habitats must be of great concern to us.
While we may not yet fully understand how these toxins are absorbed and travel through the entire food chain, there is no doubt that dolphins can serve as the sentinels for ocean and human health.

Advancing our knowledge about dolphins and the long-term survival of both people and the oceans, through long-term research, education, and cultural programs. More than valuable intellectual exercises, these studies teach us to care about the world.

The Taras Oceanographic Foundation is a 501-c-3 organization and so your contributions are tax-deductible. Our State of Florida Solicitation of Contributions Registration Number is CH15629.

Your ticket for the: Toxic Algae Blooms: Health Threat to Dolphins and People