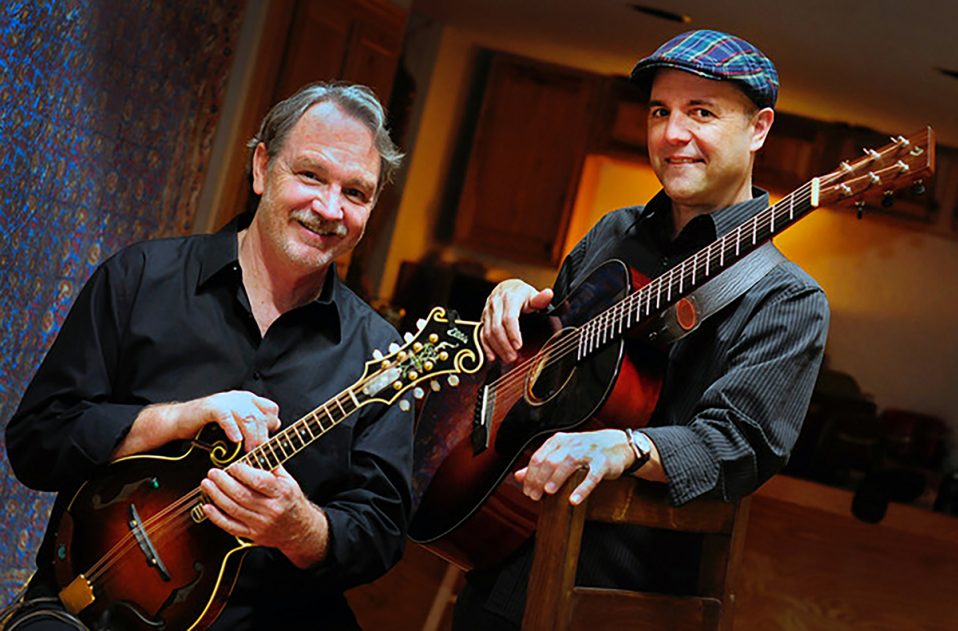 The Tim May and Steve Smith duo brings an evening of original, traditional and swing music with mandolinist/vocalist Steve Smith and Nashville guitarist/vocalist Tim May. The two musicians have collaborated in studio and on stages nationwide and now bring their acoustic brand of fire on the strings to our town. Their latest CD A Tribute to the Carter Family (Sept. 18) follows on the heels of (July 2016) Murder of Crows and the acclaimed Tim May and Steve Smith CD. All of the recordings reflect upon this acoustic music force the duo has become and includes original and traditional works. Their shows include tight vocal harmonies, dazzling guitar, mandolin, octave mandolin and twin mandolin works throughout a broad range of styles.

It’s well known that mandolin and guitar duets played a lively role in homegrown entertainment and later shaped the sound of bluegrass and early country music (as witness the Monroe Brothers, the Blue Sky Boys, and others). Now, Tim May (guitar and vocals) and Steve Smith (mandolin, octave mandolin, and vocals) are honoring this tradition—and even advancing it. Bluegrass Unlimited (June 2016) Tim May and Steve Smith have once again delivered a clever, curious, concoction of tunes with MURDER OF CROWS another pack of lies. You never know what’s coming next from these two maverick players but always skilled pickin’ and singing. When I need something totally original and on the back forty of the bluegrass barnyard for my radio show-this project does it! Jerry Mills, KSKE FM/KRAN FM, Colorado & Wyoming

Had a fantastic show last night!! Benefit concert with Tim May and Steve Smith … as usual they wowed the audience with music from across the spectrum of bluegrass, swing, pop and original tunes…..these are two of the nicest guys on the planet and their musical synergy just continues to amaze me … Doc Hull

Flatpicker Tim May has been working in the Nashville area for over 20 years as a sideman, session player, band member and performer. Higher profile projects have included touring with Patty Loveless and John Cowan, and working as a regular on the Grand Ole Opry with Mike Snider. Tim was the solo guitarist on Charlie Daniels’ recording of I’ll Fly Away, which was nominated for the Best Country Instrumental Performance Grammy in 2005. That same year he was session leader on the critically acclaimed Moody Bluegrass album (he later played on Moody Bluegrass II as well). The Nashville Scene selected Tim in the Best Instrumentalist category in their 2012 Reader’s Choice Poll.

Steve Smith is not only known as one of this country’s top mandolin players but also as an outstanding educator. Along with his work with the Roots/Bluegrass group The Hard Road Trio and the Alan Munde Gazette, Steve has been on faculty at the California Coast Music Camp, the Puget Sound Guitar Workshop, and Camp Bluegrass (for over twenty years running), just to name a few. Along with thirty years of coast to coast touring and performances at countless festivals and venues, Steve has performed in Ireland, Germany, France, Denmark, Sweden, Switzerland, the Netherlands, Cuba and the US Virgin Islands. He has also composed and performed the score for a production of the Sam Sheppard play Curse of the Starving Class, and appeared on over 40 albums as performer and producer including guitar legends Jim Hurst, Missy Raines, Mitch Perry, and Tim May, banjoist Bill Evans, Alan Munde, Nate Lee and Tim O’Brien.

Your ticket for the: Ocean of Notes House Concert: Tim May & Steve Smith