The Taras Oceanographic Foundation was founded in 1998 and is a non-profit, tax-exempt organization, headquartered in Jupiter. It is named after Taras, the son of Poseidon, who, when Taras was shipwrecked, rescued him by sending a dolphin, which Taras rode to traverse the sea to the south of Italy. Brought ashore, Taras founded the city of Tarentum, today known as Taranto.

Dolphins have also played a key role in the lives of the Founders of the Foundation, Drs Stefan Harzen and Barbara Brunnick who have been studying dolphins since their late teens. They recognized that we can not only learn about dolphins and their lives, but that these marvelous animals can also be our guides to understand how the oceans work. This insight informed the vision of the Foundation:

To advance marine science and assure the long-term survival of both people and our oceans through conservation research, education, and cultural programs

The Founders were also determined to ensure that the organization’s operation would not have a negative impact on the very life systems it seeks to protect. Consequently, the Foundation implemented a comprehensive sustainability program, which includes offsetting its entire carbon footprint, thus making it a zero-carbon organization.

Operationally, the Foundation is driven by a small group of enthusiastic scientists and citizen who adopted a leadership-by-example approach to engaging the general public in a dialogue about the importance of local dolphin populations, marine habitats and global environmental sustainability.

For us scientists our work is incredibly important to us. It’s not a job, it’s our life and we invest everything we got into it. We are passionate, driven, purposeful in the pursuit of our objectives. We like precision. We like questions. We like answers. We like knowledge. We realize that having citizens and the public involved is essential.

Together we have established a highly successful track record, creating measurable, positive impacts around the globe. All of our programs are long-lasting and impactful. As we enter into the third decade, we remain committed to turn the tide on marine research and educating children and adults on the deeply intertwined relationship between our oceans’ health and our own well-being. And the stars of the show remain Dolphins. 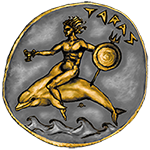 Throughout centuries, every culture that has had contact with dolphins has created myths and legends about how they came into being, and what their existence means to the world. In our times, dolphins have come to symbolize the concern for the environment and the necessary sharing of the earth. They epitomize and illustrate many of the problems humans inflict upon the sea and engender, in people who might not otherwise care, the desire to protect the marine environment. We look at dolphins as ambassadors and key indicators of the ocean’s health and the health of humanity.

Your ticket for the: History & Vision