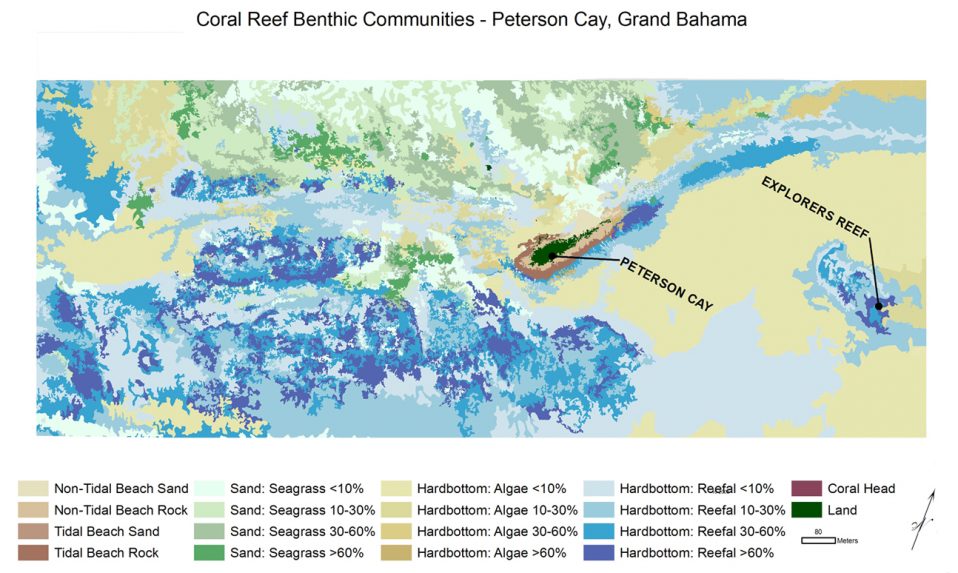 Considered among the most complex and diverse environments on Earth, coral reefs play a key role in the health of our planet’s oceans. Pollutants, algae blooms, over-fishing, damage due to development and mooring are well known threats to their own health and recent changes in the global climate are causing additional stresses, including a rise in water temperature and acidity. The result is a further decimation of the existing reefs and the creatures that underpin the ocean’s food web.

Most of our knowledge about coral reefs and benthic habitats is based on monitoring data gathered through a range of methods, mostly reef surveys, varying from rapid monitoring by trained volunteers to highly detailed, species level observations. However, these surveys provide little, if any, information on adjacent benthic habitats, such as sea grass beds or hard bottom, and more importantly, fail to appropriately address and document the spatial component of the marine ecosystem. While coral reef mapping in itself is not new, most of these maps may differentiate shallow from mixed reef areas, but they do not provide further detail, nor do they include adjacent areas of sea grass beds or other benthic habitats.

Caring for coral reefs, however, is dependent on us knowing far more about these extraordinary benthic environments and the associated ecosystems they host, and the establishment of baseline data against which future assessments of ocean health can be measured.

To generate maps of coral reefs, we have used aerial and satellite imagery, remote sensing and ArcGIS, and on-site field-surveys combined with the marine habitat classification framework defined by the Ecological Society of America (ESA) and the National Oceanography and Atmospheric Administration (NOAA) Office of Habitat Conservation, which provides for the distinction of community types and density variations therein.

The image shows a highly precise map of the marine area surrounding Peterson Cay that discerns different habitat types from bare ocean floor to algae, sea grass, and coral reef, highlights density variations in each, and pinpoints the exact location of individual species of interest such as the endangered Elkhorn coral.

The ArcView software allows us to determine with impressive precision the spatial expansion of each marine habitat across the study site. As it turns out, coral reef, in its various expressions of density covers 208 acres, sandy bottom with various degrees of sea grass spread out over 263 acres, and areas of hard pad, with algae (generally red and brown algae) of one degree or another covered 209 acres. It is worth emphasizing though that the density of algae coverage in two-third of these areas is less than 10%.

Being able to accurately locate individual corals or territorial fish species is essential for successful management and conservation programs. For instance, observations of the invasive Indo-Pacific lionfish (Pterois volitans), which poses a significant risk to native species, can be charted on the map facilitating its capture and eradication. Having a visual representation of the entire reef, or a number of reefs stretched out across a larger area, is the best means in determining where to install fixed monitoring devices, such as sedimentation traps. The comprehensive understanding of spatial features across the reef will also facilitate the identification of additional dive sites suitable for commercial scuba operators. Increasing the number of dive sites will alleviate the pressure of those currently used every day by multiple groups. Marking mooring sites adjacent to shallow reefs will help avoid reef damage caused by boat traffic and anchors. Last but not least, knowing the exact location, dimension and composition of the reefs will help develop sustainable land use plans for coastal projects that benefit from these natural jewels rather than harming or destroying them.

By documenting the actual environmental conditions, we are able understand the relationship between different habitat types and the larger reef ecosystem as well as monitor expansions or declines of certain habitats. Conducting similar studies on adjacent reefs will eventually lead to a larger-scale map and a deeper understanding of both local and regional reef ecosystems and their processes.

Although this new mapping technology doesn’t necessarily represent the natural state of any ecosystem, it can at least provide a baseline against which we can compare future observations, thus establishing a powerful framework for conservation and management. And that’s what the map of Peterson Cay’s coral reef will do. By combining traditional observational recordings with precise spatial information, it provides new insight into the fascinating world just below the water’s surface.

Your ticket for the: Coral Cartography Advances Conservation